Shatter. Budder. Crumble. Rosin. Understanding the difference between each product is a common query among Montana medical marijuana patients. Aren’t they all the same?

Each concentrate is influenced by a variety of factors during and after the extraction process. Here's how various cannabis extraction methods influence the final product and what that means for you.

Why are there so many different types of cannabis extracts?

Cannabis extracts come in many different shapes, sizes, and consistencies. This variation is largely based on the extraction process to which the source plant was subjected. 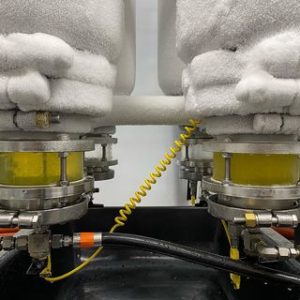 Factors influencing the final product include the solvent used to extract the compounds, the temperature at which the extract was processed, and the methods applied following extraction to alter the final product.

Cannabis extraction methods may be a precise science, but they’re also an art. The final product can be influenced by the extractor's own flourishes such as the use of a specific solvent, like butane, or for a specific tech such as crystallization.

For example, budder, a fluffy, airy type of wax, is created by applying a whipping tech to the extract at the end of the process. The whipping introduces pockets of air which, when the extract cools, results in a pumice-like construct. Similarly, pouring the extract on a flat tray and allowing it to solidify results in the glass-like structure of shatter.

Additionally, certain types of extracts lend themselves to different uses. For example, shatter is a solid extract that can be easily broken down into small and manageable pieces, reducing the mess often associated with more viscous, sticky extracts.

No matter how you slice it, the result is expanded patient choice, with many options for you to choose from that best fit your lifestyle and needs.

The role of solvent in cannabis extraction methods

The solvent an extractor uses can influence the process. Some solvents are excellent for terpene preservation, for example, while others are more effective at pulling cannabinoids. 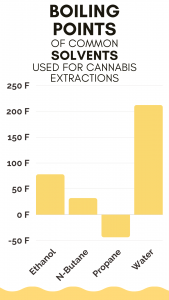 Solvents that require higher temperatures for extraction are likely to result in the loss of terpenes more desirable compounds like cannabinoids and terpenes, which is why the solvents with lower boiling points – like the hydrocarbons butane and propane – tend to be popular among extractors.

Water, carbon dioxide, and ethanol are other common solvents used in various cannabis extraction methods, however, those tend to contain a higher amount of fats or lipids and fewer terpenes. One reason they can be more fatty and less terpy can be related to the boiling temp of the solvent used.

What is solvent polarity and how does it influence extraction?

In chemistry, the term polarity describes the separation of electrical charges in a molecule; both solvents and compounds found in cannabis can be varying degrees of polar or non-polar.

For example, chlorophyll is polar, so using a more polar solvent – such as water – might result in a less clear extract than a less polar solvent, like butane.

While cannabinoids are all non-polar, some terpenes are polar, so the choice of solvent also strongly influences the terpene content of the final product. From least non-polar to most, common solvents include water, ethanol, CO2, butane, and propane.

Depending on which terpenes an extractor wants to pull, and how many, they might select one solvent over another.

Additionally, terpenes have a low boiling point. When the boiling point of the solvent is high, the final extract tends to have fewer terpenes.

That's because the terpenes are also boiled off with the unwanted solvent. Very little can change this besides the solvent used during the extraction. 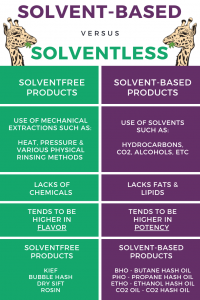 Solventless extracts are typically produced using heat and pressure alone. Although the term solventless, a solvent is used, and that solvent is water. "Water is called the "universal solvent" because it is capable of dissolving more substances than any other liquid."

Many people overlook water as being a solvent, but chemistry deems it exactly as that, a solvent.

Rosin is a good example of a solventless extract that is created by high pressures and heat. As a result, a flavorful product is produced that retains the effects of a complex and varied terpene and cannabinoid profile.

Adversely, this product tends to be of a higher fat and lipid content. The process never includes very cold temperatures to filter/process the fats out of the final product therefore they end up in the final product, every time.

One of the factors which align with the type of solvent used is the type of cannabis extraction that takes place. Extraction methods share similar steps, however, the end product can vary massively.

The type of extraction methods vary in the time it takes to produce the final product and also heavily influence characteristics from color, terpene content, fat content, and even cannabinoid content.

Biomass is first placed into a column. The solvent, which is within a different column, or tank, is then pushed as a liquid, via Nitrogen or by creating a thermodynamic environment, through the column containing the cannabis biomass.

Butane & Propane extractions using a closed-loop system allow a wide range of different concentrates to be produced in a safe & cost-effective manner and why CLS's are one of the most common methods when it comes to producing concentrates.

Super Critical CO2: Extraction methods using CO2 is another method widely used extraction method. High pressures and ranges of temperature changes are used in order to run the CO2 through the cannabis biomass.

When a molecule is in a supercritical state, it has properties of both liquid and gas. CO2 extractions are commonly run within CO2's supercritical state of both gas and liquid, allowing for maximum contact of the CO2 to cannabis biomass.

CO2 extractions are largely hands-off, however, can be time-consuming, as the CO2 is continuously cycled through the material to maximize the final yield.

Concentrates produced by CO2 extractions normally have to undergo winterization as the final product tends to have a higher content of fats and lipids when compared to other extraction methods.

Ethanol Extraction: Ethanol extractions are much more straightforward when compared to other extractions. Cannabis is first put in a vessel, usually a stainless container, similar to a washing machine. Ethanol is then added to soak the cannabis. After stirring and agitation, the cannabis is removed and the ethanol is then evaporated.

A large challenge using ethanol is presented by ethanols polarity. Due to the non-polar and polar properties of ethanol, the final product contains unwanted polar molecules such as chlorophyll. Chlorophyll makes the end product more bitter with an undesirable color.

Ethanol extractions are beneficial on large scales, due to the cost when compared to other solvents.

Solvent-Free Extractions: Solvent-free extractions are a large group of products, however, all have one common trait; all were extracted via water, heat, or pressure, or a combo of the three.

The science is quite simple. During solvent-free extractions, trichomes, crystalline formations forming part of the structure containing the terpenes and cannabinoids, are first removed from the cannabis flowers.

Trichome heads, the most potent area, are extremely tiny when compared to other components such as trichome stalks.

After the trichomes have been extracted they can be manipulated in a number of ways to produce a number of final products. Old school hash is produced by working these trichomes together by hand. Working them mechanically together producing a dark, sticky, potent substance.

Rosin also incorporates the trichomes by using heat and pressure. The trichomes are placed together in a bag, that is then placed in a press that has heated plates. Using high amounts of pressure, the heat plates press down on the trichome-filled bag that essential "juices" the trichomes.

After solvents (or solventless methods) have been used to extract the compounds from the source plant, there are several techniques extractors can employ to create the final product. Some of these techniques include:

Purging: Once an extract is pulled from a plant, the extract may have some low-boiling solvents left behind. Purging removes these unwanted, excess solvents from the extract. This is typically done by using a vacuum oven and a vacuum pump.

CRC: Another technique, known as Color Remediation Cartridge (CRC), influences the appearance of the final product through silica, carbon, clays, and other mediums.

These mediums pull different pigments and other impurities from the plant & wax, resulting in a unique, colorful appearance in the final product. For example, using bentonite clay during the extraction process tends to pull red and green pigments from the plant, while different mediums instead pull yellows and golds.

Post-extraction manipulation: Once an extract has been pulled from a plant, extractors can apply several treatment types to create the final product.

Whipping an extract, for example, results in a light and fluffy budder. However, it also causes more terpenes to degrade when exposed to heat and air, so budder trades terpenes for a more aesthetically pleasing and manageable final product. Shatter, on the other hand, preserves more terpenes when compared to budder.

Extractors can also use mechanical devices, like centrifuges, to purify products like THCA diamonds, which are largely devoid of terpenes and helps result in a product that is up to 99% pure THCa.

What are the available cannabis extracts?

Extracts are products derived from cannabis flower that contain concentrated amounts of cannabinoids, like THC and CBD, and terpenes, the flavorful and aromatic volatile organic compounds known for giving cannabis strains unique flavors and enhancing their effects.

Concentrated extracts are growing in popularity because they’re much more potent than flower. In fact, extracts remain one of the fastest-growing sectors of the cannabis industry. Here's a look at some of the most common types of cannabis extracts you might encounter at your local dispensary.

It is important to note that there is a lack of standardized naming conventions in the cannabis industry. This means that product names may vary from company to company.

There is no clear right or wrong, but the variability can be confusing. While the list above describes extracts by some of their most common names, you might encounter some products made with the same cannabis extraction methods, but with different labels.

Cannabis extraction methods and processes are complex and in-depth, sometimes making it inaccessible to many consumers.

Knowing more about how your extracts are produced can help you not only guarantee you are purchasing a quality product, it can help you to make a more educated selection of a product that will best fit your needs.

If you have any questions at all about our extraction processes or how they influence your final product, contact Think Higher Caregiving. We can explain these complex processes to you in plain language so that you can be sure you go home with the cannabis extract that will help you feel better.